The satellite Internet service Starlink is further expanding its offer: according to founder Elon Musk, owners of motorhomes and similar large vehicles can now get the necessary hardware and start using the service in a timely manner.


This was announced by Elon Musk himself on Twitter. At the same time, however, motorists are being deprived of the hope that they too can use a Starlink antenna to provide themselves with fast Internet via SpaceX’s satellite infrastructure. “The antenna is too big for cars,” Musk wrote on Twitter. Starlink is now officially launching for motorhomes, campers and other large vehicles – but may only be used with restrictions.

This includes, for example, that Internet access may only be used when the vehicle is parked. During the trip, access to the Starlink network is prohibited. The range of services is otherwise almost identical to that for private households and small companies and, according to Musk, “immediately available”.

According to the terms and conditions, the Starlink users must be the owners of the motorhome or “large vehicle”, as the installation in a rented motorhome is much too expensive.

There are these restrictions

Access to the Internet is also restricted locally. Only where the Starlink satellites can provide active and reliable coverage will you receive reception in your motorhome. For example, if you are traveling through the United States, you may not yet have a reception in some states. However, regardless of this, the service is always billed in full monthly installments. The biggest limitation of the service is that it cannot be used while the camper is on the road.

Starlink even warns that trying to access the Internet while driving with the hardware provided by the company will void the warranty for the antenna kit.

The entry into the Starlink network for motorhomes and Co. currently costs 599 US dollars plus 50 US dollars shipping costs and applicable taxes and is therefore significantly more expensive than stationary use by a private user. In addition, you pay $ 135 for a monthly subscription.
Infographic Starlink: SpaceX increases satellite count by more than 100 percent 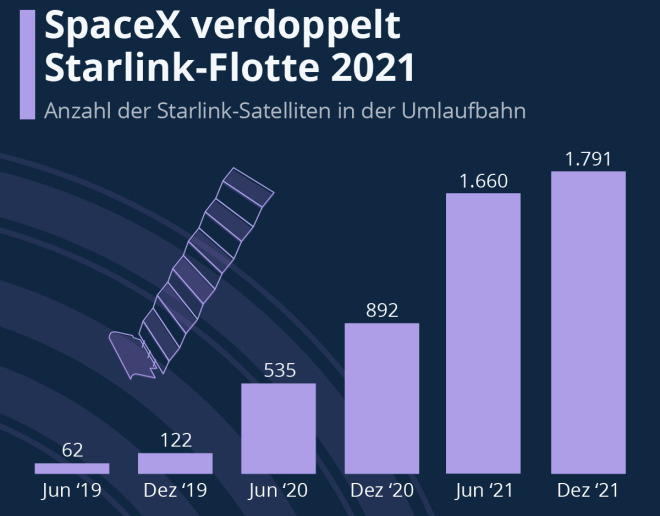 Seal on it: BSI awards IT security labels for Internet routers